Welcome back to the Acme Wheelers website after a short absence.  You may have noticed that we have been off-line for a few weeks, this was because the gremlins had got into the system and caused a few problems which have now been resolved and a safety net put in so that we should not be off-line again in the future.  I would like to thank Kerry Lewis for his, not inconsiderable, efforts to put the photographs and articles back into the system to ensure that the record of Club events is back for everyone to view. Club Champions Section still needs some work which will be done over the coming weeks.

I hope you will enjoy searching through the web site and if you have any items you would like included please get in touch.

There was a three month period when Gerald was not a member of Acme Wheelers, but he has never been a member of any other cycling club.

Gerald became a member of Acme Wheelers in October 1941, three months after he was born and that is the only period of time when he was not a member of the Acme. His membership was set up by his father Joe, himself a founder member of the Club.

Obviously from that family background Gerald soon took to cycling and one of his early long rides would have been a family outing to Highbridge in Somerset where they had relations.  At the age of 8 Gerald cycled to Cardiff to take the White Funnel Steamer to Weston and then cycled on to Highbridge, near Burnham on Sea.  Just to add to that picture, Gerald’s mother and father made the journey on a tandem with younger brother Chris sitting on the back.

He competed at all the available distances in Time Trial events though, perhaps wisely, he never rode a 24hr.

He was the Welsh Hill Climb Champion in 1965, and was a member of the Acme winning team on many occasions.  In 1967 he was the South Wales Grass Track Champion. Strangely his only Club Championship came in 1962 when he won the Club 100ml Championship, however, it must be remembered that there was a great deal of serious competition in the Club during the time that Gerald was racing.

Gerald encouraged his family to cycle, as his parents had done, and Anthony became a very accomplished rider winning Club Championships from 10 – 100ml and a 12hr Championship.

Gerald’s wife, Audrey, did ride a tandem with Gerald but after the second ride found that her legs were not compatible with his.

Gerald served on the South Wales District Council for many years, representing Acme and one of his favourite tasks was finding and working out new courses.

Within the Club Gerald was Chairman on two occasions and has been our President for more years than most members have been in the Club.  In that time he has organised and timed many Club and Open events.

Over the decades that span his dedication to racing and Time Keeping, Gerald has been and continues to be both a highly respected and highly regarded member of the cycling fraternity. As everyone will be aware, ill health in recent years has meant that he has not been able to be involved in the way that he would have wanted to be, however, his significant contribution to cycling will not be forgotten.

A little later than normal the Club Hill Climb Championship was held on Sunday 10th November. As usual two dates were set aside but this year we were lucky enough to have a lovely sunny day, though a little cold, on our first choice date.  The Barn Hill route was used, a tough climb with no run up for the riders, starting right where the road begins to rise.

With their clocks synchronised, Time Keepers, Roger and Margaret Evans were ready for riders to sign on. The sun was shining at the start and finish area with a little colder, shady section a little further up the hill.

Four members signed on for the event, a nagging knee problem for Gary Flower meant he could not ride but he was able to take over the “pushing off” duties.  First off was Club Treasurer Dave Roberts riding his one event of the year, followed by last year’s winner Dave Singleton.  Next off Dean Cummings was having a day off from the road circuits and finally Kerry Lewis took some time off from camera duties.  All riders had to work hard on this testing course at a time of year when they would normally be winding down the training for a few weeks.

Final times were reflective of the amount of racing each of the riders have been involved in during the season with last year’s winner, Dave Singleton, posting a time of 2m 42s, this was closely followed by Dean Cummings’ 3m 03s. A little further behind Kerry Lewis posted 4m 09s with Dave Roberts finishing fourth with a time of 5m 05s.

Well done to all riders and many thanks for those who enabled the event to take place.  The next event for Club members will be a less strenuous as we look forward to the Christmas Dinner.

Retired police officer Dean Cummings has recently become a member of TLI Racing a Cycling organisation that caters for age related events. http://www.tlicycling.org.uk/    Five events had been organised in and around the Pershore area. Unable to enter all five, Dean selected the two held on the popular Pinvin circuit, 4 laps and a total of 36 Miles.  Being handicapped the race was spilt into  three groups on the road, Over 60, Over 40 and any younger in the scratch group. There was a further option, depending on the rider’s ability and experience they could choose to ride in whichever group they felt was suitable.  The Scratch Group mainly consisted of 2nd ,1st and Pro Circuit Series riders.

Dean selected the middle group which was required to chase the 1st group, which had a 3 min start and they in turn were chased by the Scratch group also with a 3 min gap. The race was fast as riders raced the winding country roads through and off at speeds of over 25mph.  The 1st group on the second lap and continued riding at speed to avoid the catch with the Scratch Group .

Dean worked hard in the group and took several turns on the front, working well with fellow riders many of whom he knew from the LVRC events. As a result of the high quality scratch riders the middle group was caught with about just over a mile to the finish.  Now with about 65 riders tearing up the country roads Dean maintained a safe position and finished seconds behind the main bunch, very pleased with his racing efforts.

The second event was held on 24th July on the same circuit. With a Greek holiday in his legs and belly there was no certainty on form for the day. With only a handful of Scratch Group riders the organisers decided that they would start with the usual middle group and chase down the 1st group of high quality older racers with a clear 5 mins start.

Wow!! A group of approximately 8 class racers of 2nd Cats set the blistering pace, within which Dean was able to maintain a position sitting out of trouble and protected by the body of the peloton. The pace was relentless reaching speeds over 30 mph. Sadly it didn’t last as on a straight road two riders from a Shropshire Club decided to have a chat at about 28mph touch handle bars lost control and swayed uncontrollably in front of him before both heading off into the right hand hedge. Breaking hard and almost coming to a stop, riders came flying him past on both sides, desperately trying to get his 53/14 gear going he could see the bunch speed away in the distance.  Although Dean gave chase he decided to call it a day at the Start/Finish line. When the group passed this point they were 25 seconds behind the leading group and the catch was made early on the fourth lap. The race was won by a KTM sponsored rider who sprinted away from the bunch and who went on to win the whole series on point

Over the racing season there are eleven 50 TT mile scheduled in the South Wales District, most are organised on the R50/1B Course. This difficult course takes in two laps with some very sharp climbs followed by fast descents. The steepest of the climbs comes after 9 miles and again after 34 miles.  Club member Dave Singleton arrived at the Start on the A40 for a 9.07 am start, over an hour after the first rider. Conditions on the day were fine with not too much wind to affect riders.  Dve’s main target for the event was to improve his PB for the distance. 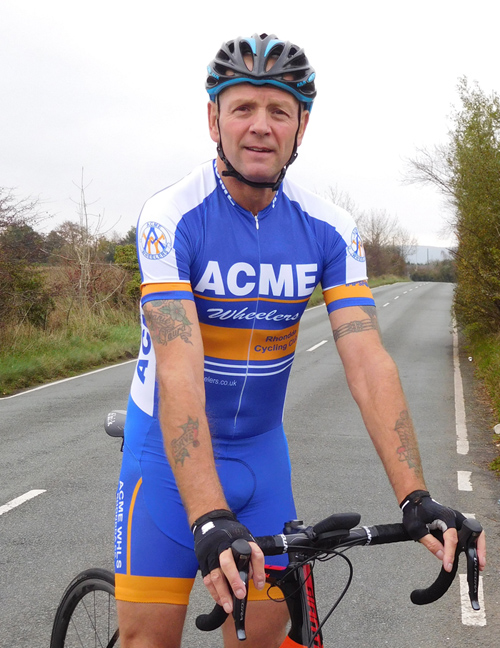 Just after Raglan Castle the course takes the old road towards Monmouth before returning to the A40 heading towards Abergavenny to do it all again.  Clearly the course and conditions suited Dave as he posted a time of 2:00:15, four seconds short of a full six minute improvement on his previous PB.